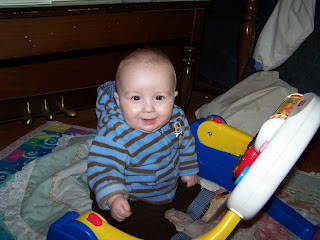 It's been a busy few weeks in the Tummers house....and admittedly, Cameron has been super cute lately so most of these pictures are of him!!!...and why that last sentence needs to be underlined I have no idea...silly blogger program!!!
After recovering from the H1N1 bug he decided it was time to master sitting on his own...most especially at his car toy. He has since moved onto a new favourite...a metal bowl filled with metal lids, blocks and toys....easy to entertain this kid!!! 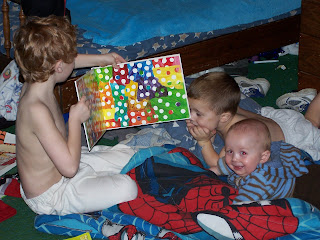 Our boys love to read and be read to. Zack is becoming a very good reader (he's actually reading to me right now as I type!!!). His brothers enjoy hearing him read...especially when they all lie around in the big boys room and 'hang out'. 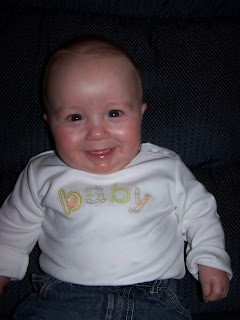 Just a cute shot of our smiley baby. He weighs 18 pounds now...that puts him about the 40th percentile for a 7.5 month old baby...the age he'd be if he'd been born on his due date. He's actually 9 months old this week and for that age he's around the 15th percentile. Our doctor is very pleased with his development...and so surprised when she saw him again after 5 months...she called him Mr. Piggy!!! We also saw the physio therapist last week and she has given us some new things to work on....mostly focusing on getting him to put weight on his arms, opening up his hands and beginning to move from seated to his belly as well as his back onto his side and up to sitting. He's a long way from being done with physio but is coming along well! 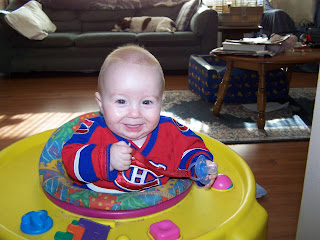 Oh another cute one....too bad his Dad has such horrible taste in hockey teams eh! Cameron is 'blessed' to have 2 Montreal jerseys. This is another of his favourite places...the exersaucer. He loves to be on his feet...though one of the biggest reasons for this is actually a negative thing...it's easier to be on his feet and not using his arms or hands to get around, play or balance. 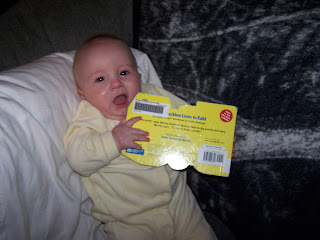 Did I mention our kids LOVE books!!! He can even turn pages!!! 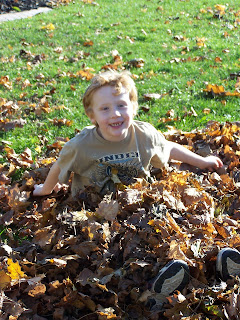 A late fall day of fun in the leaves. I think we took this picture when the weather was warm in early November. 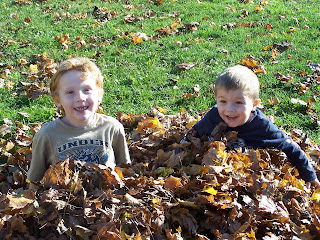 Brycen and Zack raked up a huge pile...which was amazing since we have almost no trees on our property....and they jumped in! 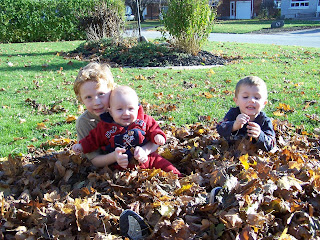 They had so much fun that they had to get their brother to join them! (again not sure what's up with this underlining script) 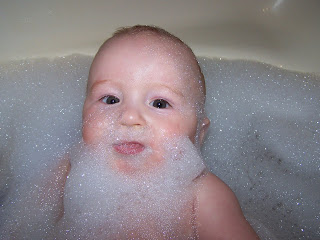 Brycen and Cameron have been having bubble baths lately and pretending to be Santa. 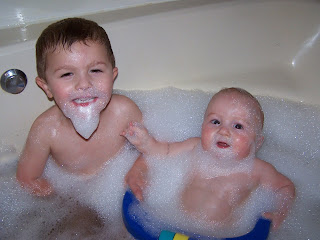 Brycen has more of the Colonol Sanders look with his goatee!!! 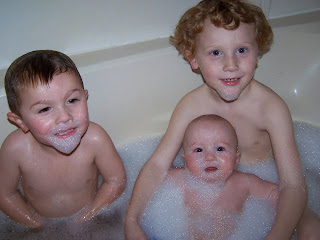 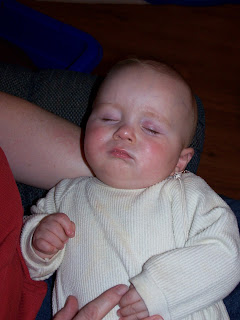 Not often we get Cameron quiet and still enough to get a shot like this!!! 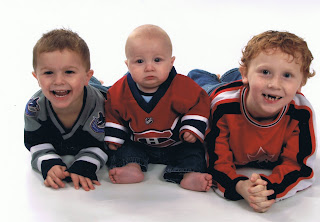 My boys picture for the holidays...I LOVE IT!!! 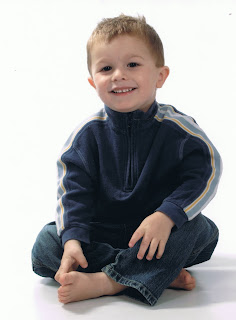 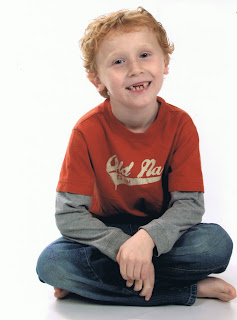 Zack at 6 years 6 months
Posted by Jodie, Geoff, Zackary, Brycen, Cameron and angel Cole at 3:49 PM No comments: Links to this post

Happy Halloween from the Tummers! 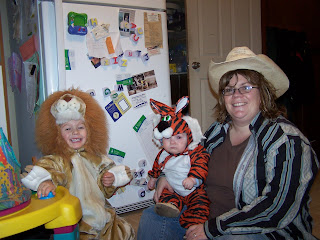 Brycen, Cameron and Mommy had a great time at a Halloween party at the library in Monkton. 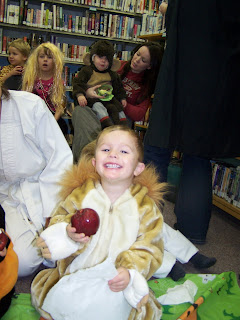 We played a few halloween type games....Brycen's favourite was bobbing for apples. 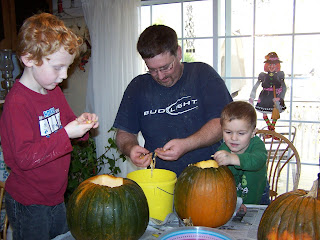 On Saturday afternoon the boys, Geoff and our exchange student, Edith (sometime I'll post a picture of her...I promise) carved pumpkins. They had a great time until Brycen fell off the chair he was standing on and split his head open. We almost went to the hospital but decided it just wasn't how we wanted to spend Halloween night and thankfully it stopped bleeding quickly. 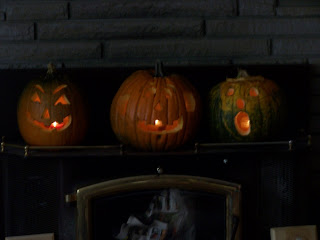 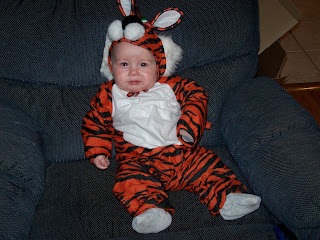 Cameron dressed up as a tiger. We had planned to take him out for a little while but earlie that day he started running a fever and seemed to come down with the bug that Edith and I had had all week...could be H1N1...don't know and really aren't too concerned about it either. So instead he stayed home and watched all the spooks come to the door. 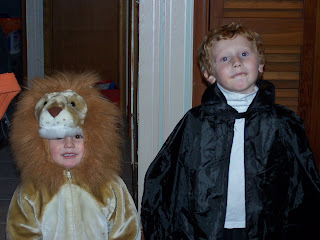 A pair of very excited trick or treaters headed out on Halloween night. They got TONS of candy and had a very good time. Geoff stayed home with Cameron and handed out treats for awhile and then we switched. We had about 75 kids come to our door this year. 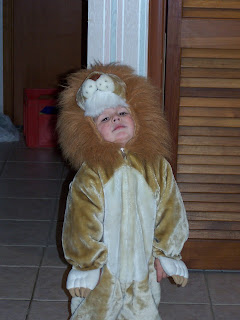 Our very 'sharp' lion...sharp was Brycen's word choice because of the claws. 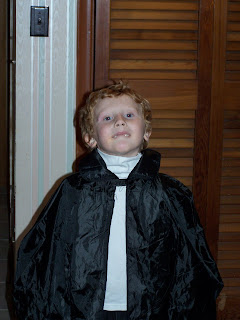 Zack chose his costume because he had the 'perfect' teeth for it...someday soon I hope he'll have some front teeth...it's only been almost 5 years since he knocked them out!!! 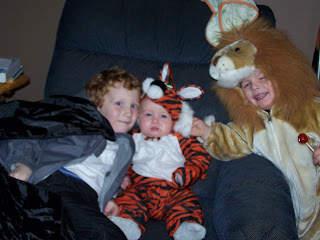 Just before we went out trick or treating to Cameron's one and only house...Cheryl, our babysitter. 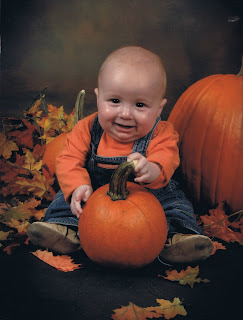 Just had to add this 6th month picture of Cameron as it is so very adorable!!!
He continues to amaze us with his infectious smiles and laugh, his strength and his amazing personality. I am finding so much joy in being his mom lately. I find it remarkable as I post these Halloween pics that my blogging stopped with Halloween pictures last year at this time. In hindsight I wish I'd blogged all the way through the pregnancy and kept everyone updated as well as wrote I felt at the time. I can't change that but I will make sure that I keep a good account of our lives, the joy our children bring us and the zest we all have for life now.

Posted by Jodie, Geoff, Zackary, Brycen, Cameron and angel Cole at 10:11 AM No comments: Links to this post