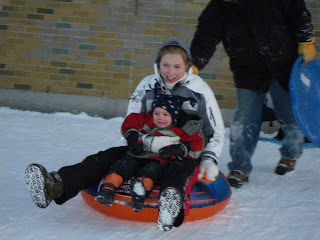 A few weeks ago we packed our crew up and headed into Stratford to go tobogganing at a local highschool. It was not only Cameron's first experience in a sleigh but also Brycen's first time on a big hill. He was scared at first and rode with Edith (our exchange student) or with Geoff. 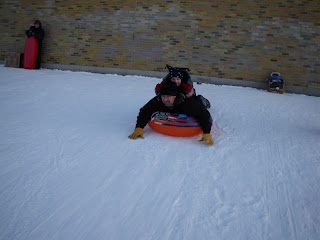 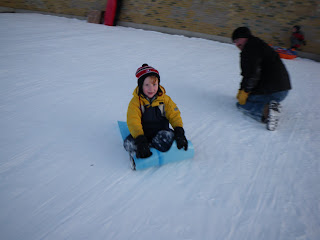 Zack is an old pro at tobogganing... he gets to practice each day on his crazy carpet at school. He was very excited to be going down such a HUGE hill!!! 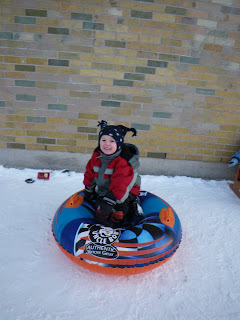 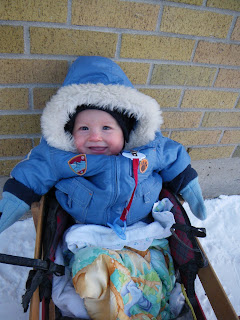 Cameron seemed to enjoy his sleigh ride and watched from the top of the hill while we all took turns. He was so calm and quiet but grinned and laughed when we pulled him around. 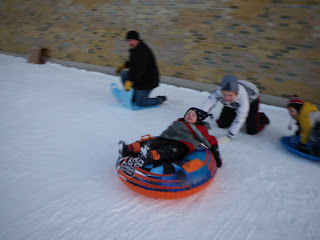 Brycen's first trip on his own....and yes that is a mix of excitement, fear and my smile is frozen to my face!!!
Posted by Jodie, Geoff, Zackary, Brycen, Cameron and angel Cole at 5:47 PM No comments: Links to this post

On November 15th Cameron was baptized at our church in Monkton by our dear friend Rev. Theresa MacDonald-Lee. 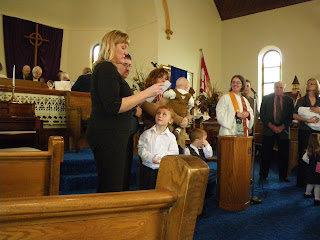 Our dear friend (and amazing daycare provider) Cheryl is also our church elder so she took part in the service as well. 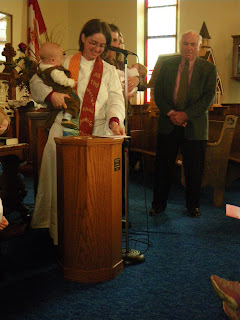 Theresa is also the minister who helped us honor our twins back in May with a very touching goodbye and blessing for Cole and a welcoming and dedication for Cameron. Cameron's Godparents Charlotte and Kerry Myers were able to be at that service and we felt that was his true baptism, his true welcoming into God's family but we also needed to complete this formal service as well. 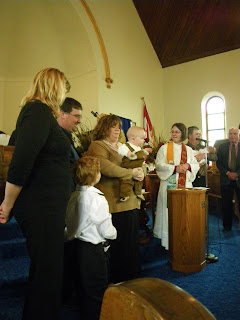 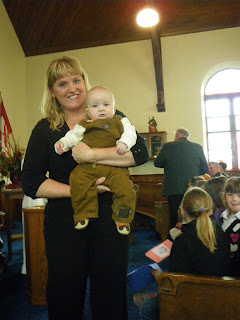 Cheryl is very special and important to all of us, especially our boys and she enjoyed showing Cameron, at her first baptism since becoming an elder, off to the congregation. 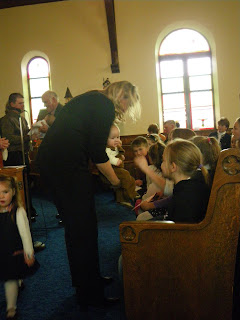 Meeting the children of our congregation.
Posted by Jodie, Geoff, Zackary, Brycen, Cameron and angel Cole at 5:06 PM No comments: Links to this post

Cameron on the move!

As Cameron screams at me to focus on him not the computer I am going to quickly give an update on him. 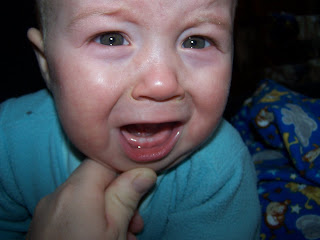 As you can see he is upset these days with a few things...the first being illness. After 4 weeks of ear infections he ran a fever and got a cold again...so off the ER we went yesterday thinking we'd be demanding to see an ENT for his ears. Low and behold they are fine...but unfortunately the 103.5 temperature, the laboured breathing, the not wanting to eat or drink...all signs of something else. After listening to his chest the doctor sent him for chest x-rays. They came back okay but not great and the doctor says he has pneumonia. He's fussy, can't sleep and wants to cuddle...okay for a mommy who is off work for another 2.5 weeks... I love the snuggles and the excuse to get nothing done. Oh and the doctor we saw yesterday said the next time he gets an ear infection we are to 'demand' to see Dr. Scott (the ENT). He was shocked to hear we hadn't been there yet and that Cameron's been treated for these ear infections for 4 weeks now.
And as you can see he also has some new 'hardware' to show off!!! That would be the second reason for being upset. I'm sure he's working on a few more...he's sure biting like he is!!!! 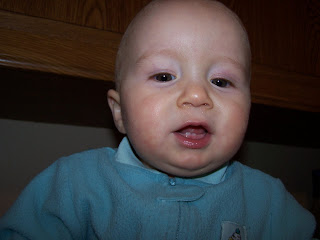 I love his toothy look!
He was weighed and saw our doc (who doesn't think he needs to see an ENT???) about 10 days ago. He was only 200 grams more than when he saw her mid November. If he hadn't made such a HUGE gain in September she might have been concerned but as you can tell from the chubby cheeks and tummy... he's not in any danger of falling off the growth chart...he just likes the bottom of it! 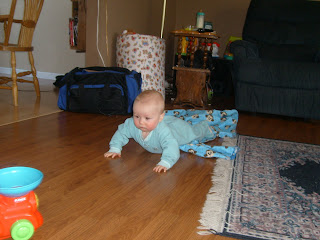 He is crawling so much now...I can't believe how busy he is.


Despite being fairly sick with Cameron has been entertaining me with his new crawl today...half army crawl, half on all fours...and all incredibly cute. I tried to capture it on video....

Oh just in case you are wondering what happened to my other kids...they really do still live here LOL! They don't pose as well for pictures but I do have some great pictures to post of our tobogganing trip a few weeks ago...but they are on Edith's camera (our exchange student) so I'll post them later!
Posted by Jodie, Geoff, Zackary, Brycen, Cameron and angel Cole at 9:01 AM 1 comment: Links to this post

Just wanted anyone who's new to reading this blog or anyone who wants to read the story of the Journey of Cameron and Cole to know to look back in June 2009. I cut and pasted our story from my Caring Bridge site to here. It's a lot of reading...I am sooooo wordy. Hopefully anyone who is looking for this info can find it now.
Posted by Jodie, Geoff, Zackary, Brycen, Cameron and angel Cole at 6:03 PM 1 comment: Links to this post

Happy New Year to everyone! It's a new year and for me I am hoping it brings my new version of the 4-H motto...Health, Happiness, Hope and Healing. As I ponder these things I am reminded of all the things 2009 brought us and can't help but remember where we were a year ago right now...having been rushed to Toronto by ambulance as my water had broke and everyone was pretty certain that one Mr. Cameron Tummers was very soon going to make his arrival. As the tests progressed and more was discovered we became more and more concerned about this tiny miracle inside of me. Everyone was so sure that Cameron was coming very soon and we were so very worried. Worried that he was so small for his age, worried that I'd be having a baby born in Toronto and worried about what was happening with our big boys at home.

I wondered if he was born this early how delayed he'd be....would he sit on his own when he should.... 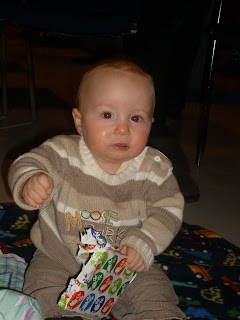 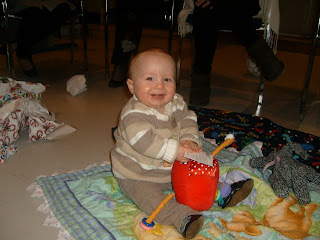 but would he crawl on time...would he have trouble with motor development. 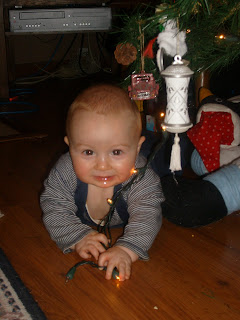 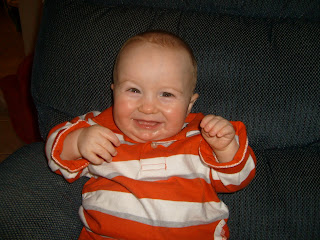 And I worried that he might not be able to survive...60% chance of survival with no complications...10% chance he might not survive at all. And just how tiny would he be, how hard would it be to grow and gain. 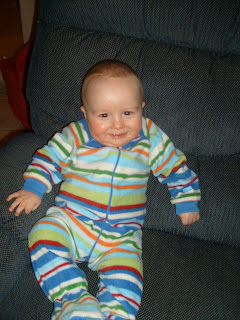 Looks like he's doing well on the gaining and growing...and the survival thing, well that would definately be a CHECK!!!

I worried then what it must be like for him to be in there wondering why his brother wasn't moving and growing anymore. 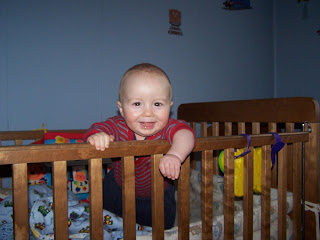 And although Cameron seems to have a hard time being alone and has an intense and focused look about him at times, I think he's making the best of things!!! 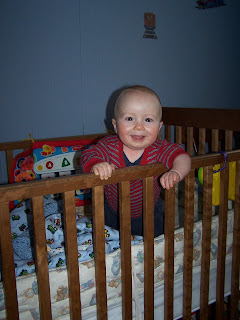 And so are we. Cameron is the best sign of a miracle that I've ever seen. God has blessed our family....we are so very lucky! His smiles can light up a room and we constantly get comments from strangers, family and friends about how happy he seems to be....is he always like this? Well yes, most of the time. Sometimes he is so intensely sad in the middle of the night and I think that's when my boys play together most....and who would want to be waken and lose those moments of play with the brother you miss so much. But all in all Cameron is blessed with the most joyful spirit I've ever seen and you can't help but to feel God's presence when you are around him. I truly believe that he wouldn't be who is today if Cole had survived. He is who he is because of the love and life of his twin and although I will always wonder what life would be like if Cole was here I know that it would be a completely different world that we would be living in.
Thanks for being my miracles sons Cole and Cameron!
Posted by Jodie, Geoff, Zackary, Brycen, Cameron and angel Cole at 11:45 AM No comments: Links to this post