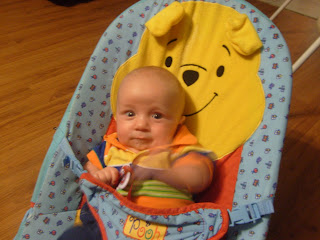 Cameron isn't just looking big...he's really getting big. He weighed 10lbs 14 oz on Thursday. We were amazed...actually I asked the nurse to recheck it!!!
The appointment went well despite getting 2 needles!!! He only cried for 10 seconds...what a trooper! All seems to be going very well. His measurements move him up to almost the 10th percentile for his corrected age...although for some reason the clinic is going by his birth age in their growth chart sytem???
Cameron is going to be referred to a paediatrician as our family doctor, for personal reasons, will be off for an extended period of time. The medical team at the clinic feels it is best if Cameron has consistency until then and were actually surprised he didn't have a paediatrician yet anyway. It will be a nice peace of mind to have this doctor as part of Cameron's health team. 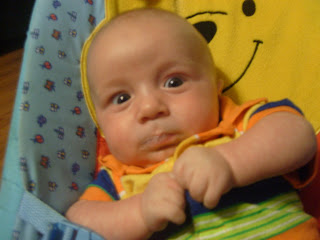 Cameron behaves very much like a 4 month old baby in many ways. Here he is blowing bubbles. He's also been known to be VERY chatty, babbling and cooing away...even the odd screech or two. We're not sure where he gets his expressive skills from!!! 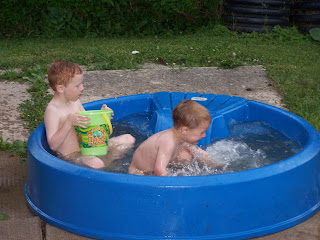 The big boys have been insisting we get the pool out so a few weeks ago Geoff and I got it out and cleaned it up. They've spent hours jumping in and out of it, splashing, playing 'Survivor Man' and making a general mess! They seem to like to swim naked...nudist colony in Monkton anyone??? 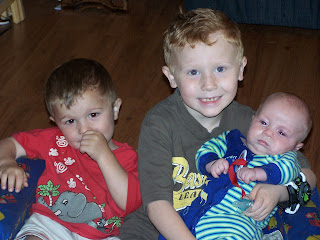 Geoff took this shot last weekend these three handsome boys. And yes, Brycen is trying to pick his nose in the picture. Kids do the darndest things!!!

Just visiting from the fetal hope board. You have adorable boys. :)